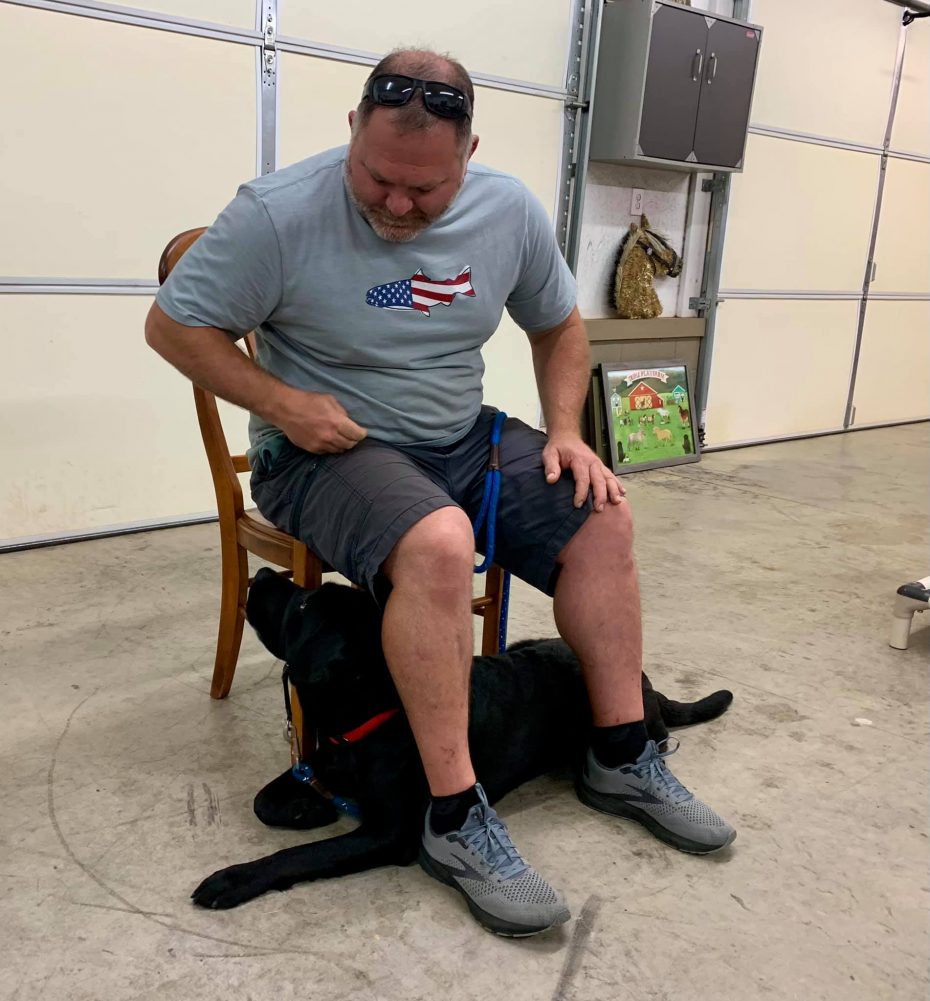 Aaron is an Army Veteran in North Carolina with 14 years of service. He was paired with CTM Walker in 2018. Aaron learned about CTM through his doctor at the Sanford VA Clinic who brought up the possibility of getting an Assistance Dog through CTM in one of their sessions together. After connecting with CTM, Aaron said everything fell into place and his life changed for the better. Aaron shared with us that he had been in a really bad place. He was stuck below a certain level and couldn’t get past it – not wanting to go anywhere or do anything, feeling like he didn’t even want to get out of bed. He was irritated all the time and that prevented him from doing things with his family. He was angry at everything and knew others wouldn’t want to be around that.

Having CTM Walker taught Aaron a new type of love. He learned to trust Walker and knew he would be there for him, which opened up Aaron’s life to doing more things. Even the simplest aspects of caring for a dog – taking him outside, walking, exercising, feeding, gave Aaron the drive to get out and let Walker do the work he was trained to do (which he loves)! When Walker has his vest on he knows it’s time to do his job and he takes it very seriously. Aaron shared that you can see the concern in Walker’s eyes when he’s working, he’s ready to be there, ready to pay attention, and never loses his focus. Walker gives Aaron a point of focus as well, which makes managing crowds and dealing with unexpected noises more manageable.

CTM Walker brings joy to everyone he’s around! Aaron told us this was his superpower. He brings joy and comfort not only to Aaron but to Aaron’s wife and son, their extended family, Aaron’s classmates in horticulture school, really anyone he meets! Having Walker with him also takes some of the attention off of Aaron, which helps him to feel more comfortable in social settings.

Family is naturally a huge part of Aaron’s life, and now Walker’s. Aaron credits a large part of the milestones he’s achieved to the support from his wife and shared that Walker has also strengthened his bond with his son through playing together and teaching responsibility and caring for an animal. Aaron was even able to take his son to Chuck-E-Cheese with Walker – a true accomplishment for most adults but exceptionally difficult for someone living with the challenges that Aaron has faced.

Walker’s best skill is knowing when to be in work mode and doing his job well, but when that vest comes off, he knows it’s time to love! He’ll even jump up and cuddle when asked! While Walker’s not working he loves to swim and his favorite snacks are pumpkin, bacon, and carrots.

Aaron has had a great support system but shared with us that even though he did, he still felt alone with his mental health issues until he got Walker. He told us “there’s just a different kind of connection” he has with Walker, one that has been a positive impact in Aaron’s life. It’s been a couple of years since Aaron was paired with CTM Walker and “everything has improved since.”

Aaron – thank you for trusting CTM. You are a valued member of the CTM family and we look forward to seeing you continue to grow with Walker.